NEW WEBSITE FOR MY WORK IN VIDEO GAME AUDIO!

I’ve created this new website specifically to showcase my video game audio work. If you are interested in my songwriting, my band or my touring activities as a French/Chinese/American chanteuse and accordionist, please visit www.jessicasongs.com

• Wednesday August 29th, 2018: Audio for “Guilds of Delenar” I’ve been composing music and creating sound effects for a medieval fantasy game still in production, Guilds of Delenar, by Batholith Games. Here is a link to a silly video of my DAW session, with music from a battle scene – featuring unexpected troops 😉

• Tuesday June, 2018: Recording unusual instruments for an indie game I’ve been hard at work in the last month recording many, many musicians playing “unusual” instruments for an game which I can’t reveal yet 😉 The goal in those recordings was to give each instrument a lot of character/personality, as each instrument would be representing a character in the game. Instruments I recorded include the shamisen (Japanese banjo), musical saw, guzheng (Chinese zither), sitar, plunger trumpet and myself on accordion. You can find some photos of the sessions on my Instagram and Facebook pages.

• Thursday March 15th, 2018: Going to GDC next week 🙂 I’m very excited to be returning to GDC (Game Developers Conference) next week for my second year at the San Francisco conference! Though I can’t yet reveal the games I’ve been working on lately, I have been able to upload some of the music I wrote for the App Novel Effect on my website playlist. So far I’ve created interactive music and sound effects for the children’s book “Caps For Sale”, “Golden Domes and Silver Lanterns”, “Blueberry Girl” and “Blueberries for Sal.” A lot of the music I compose for these title don’t “make sense” out of the context of reading the books, as the audio is meant to response interactively to reading the books out loud, but I did upload a couple of Main Titles.

• Monday November 27th, 2017: Soundscapes for Novel Effect I’ve been hard at work creating soundscapes for Novel Effect. This new app (for iPhones and iPads) makes story time even more magical by adding custom music and sound effects to children’s books as the reader reads them out loud. The first book I composed for, Caps for Sale , is already on the app, and I am currently working on my 3rd book. Creating audio for these stories has many similarities with creating video game audio, as the audio is interactive (though in this case, sounds are triggered by the reader’s voice.)

•  Tuesday November 7th, 2017: Empire Architect
I have creating some music and some SFX for a new Roman builder game called “Empire Architect.” You can find the trailer here.

• Friday September 15th, 2017: Festival European du Film Fantastique de Strasbourg So proud that Growbot, the video game I am currently composing music for, was selected as one of the 16 indie game finalists for Festival Européen du Film Fantastique de Strasbourg, in my own home country of France! Though I’m pretty sure that selection was due mostly to the beautiful artwork, story, programming and hard work from game creator Lisa Evans rather than to my own small part as the music composer, it is great to be part of such an amazing indie project, and to work on my favorite game genre: point and click adventure

• Wednesday June 14th, 2017: Updates I haven’t been very good at keeping this website updated – but I have been hard at work on Growbot, completing the music for the first 2 levels (the living quarters, and the garden.) It’s been really fun composing atmospheric, sound-design-y music (something relatively new to me) and finding ways to make the music interactive (with audio layers fading in and out depending on the player’s actions in the game.) I’m also now the organizer of Indie Dev Club, a meetup group in Los Angeles for indie game developers, writers, programmers, artists, and audio professionals to connect in person and showcase their indie games. Join us if you are in LA, and work on indie video games 🙂 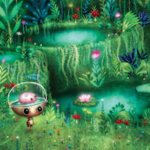 • Thursday February 9th, 2017: Composing the music for point-and-click adventure video game Growbot! I’m so proud and excited to be working on the music for Growbot, a beautiful point and click adventure video game (coming out in 2018.) Created by illustrator and game creator Lisa Evans, this is the kind of video game I play in my spare time (point and click adventure), as it features a strong story, quirky characters – all set in an inviting, magical world. Check out some of the music I’ve written so far on Spotify and the game intro on youtube (or on the “watch” section of the website) and follow the Growbot Facebook page to stay updated on the progress of the game.

• Wednesday December 7th, 2016: New Video Game Audio Website It’s still a work in progress, but I created this new website to focus on my work on music and SFXs for video games. I am still gaining experience in the field, but I am very excited about the indie projects I’ve been working on so far, and am looking forward to more in the near future 😉 Please go to the video or audio section of my website to see/hear some of my work.